The Brindabellas (the mountain range that surrounds Canberra) seen from the back seat of the car this afternoon. Canberra is gorgeous, and all the Australians who constantly insult us for no reason are missing out on so much.

Well, it feels like winter here this morning. It’s so foggy you can’t see the backyard next door, so what does our neighbourhood cat do? Stay home, you say? Nope, he comes here to sleep on the back deck! 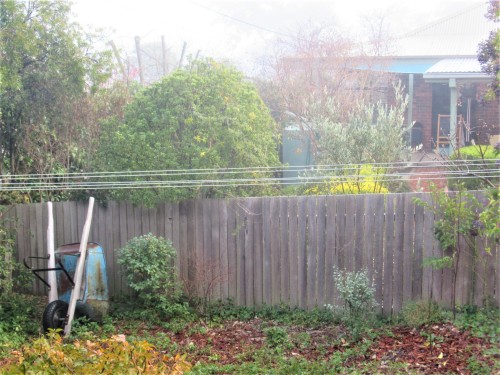 I haven’t mentioned it here, but I signed a contract with Escape Publishing (an imprint of HarperCollins) earlier this year, and have a book coming out in September.

I think it’s relevant to this blog because it is historical fiction set in what is now the Canberra/Queanbeyan region.

Here is the cover (the Brindabellas feature in the story), the blurb, and I’m also adding some preorder links:

When Alice Ryan wakes to find thugs surrounding her cottage, on the hunt for her no-good brother, she escapes into the surrounding bush.

It is wealthy landowner Robert Farrer who finds her the next morning, dishevelled, injured, and utterly unwilling to share what she knows. With criminals on the loose and rumours that reckless bushrangers have returned to the area, Robert is determined to keep Alice out of danger, and insists on taking her into his home-despite the scandal it may cause. Convincing her to stay on with him for her own safety, however, is going to take some work.

What Robert doesn’t expect is his growing attraction to the forthright, unruly woman staying in his home. Before either of them can settle into their odd new situation, their home and wellbeing come under threat and they will need to trust each other to survive. But they are both keeping secrets, secrets that have the potential to ruin their burgeoning love, their livelihood … and their lives.

Here are a couple of images from the day-long 50th anniversary commemorations for the Battle of Binh Ba in Canberra on Thursday.

The first one shows the Minister for Veterans and Defence on the left, and Vietnam veterans from the official party on the right. My father is the veteran in the centre. It was SO sunny that we were all blinded and melting by the end, despite it being the first week of winter!

The second image is from the Last Post ceremony at the Australian War Memorial the same evening. The ceremony was dedicated to Binh Ba veterans in general, and to the sole Australian killed in the fighting in particular. (There was also a British D-Day veteran present.) Afterwards, veterans and their families were lined up for a photograph – I’m one of the dots on the left of the picture! 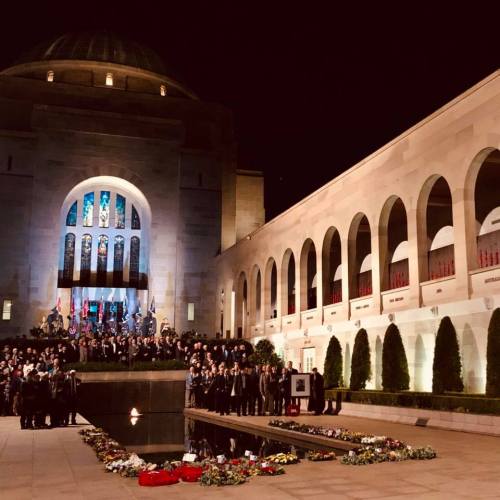 Everyone in Australia: at 2pm tomorrow the 50th anniversary commemorations for the Battle of Binh Ba – a major battle in the Vietnam War – are going to be broadcast live on television from Canberra, and then repeated the day after.

My father has played a huge part in organising this event, and hundreds of soldiers, past and present, are flying in to participate. My parents are in the official party, and will be obvious on TV, and I’ll be sitting… somewhere…! We’ve all been too busy to finalise this.

Afterwards, there’s a function at the Australian War Memorial, and then there’s a huge dinner tomorrow night, and I’ll be staying at the hotel in the city, because there’s just so much going on!

A Tree Full of Parrots

This is the view out my office window at the moment. King parrots are everywhere in Canberra at this time of the year. There were at least a dozen in the tree, but because of the bright sunlight I was having trouble photographing more than two at once. 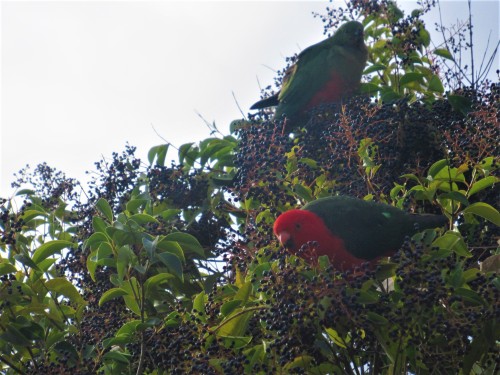 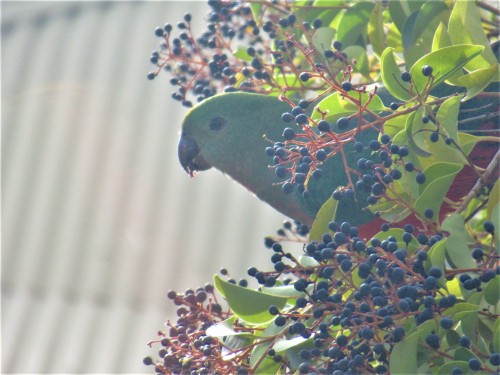 One of our Ravens

This is the Australian raven (a bigger bird than ravens overseas) who flew off with my food container on Sunday afternoon. A couple of hours later, the thing dropped out of the sky – on the other side of the house! I caught it having a drink (and flying around the back deck, carrying the container again!) today.

The feathers are spectacular. Almost blue in the sun. 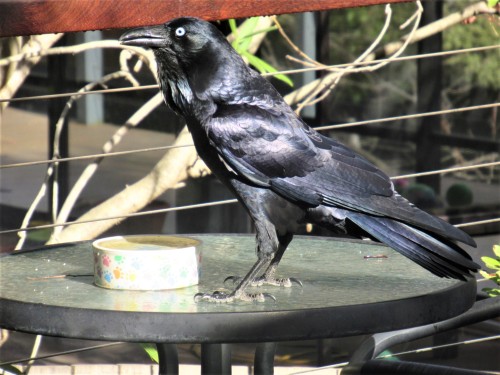